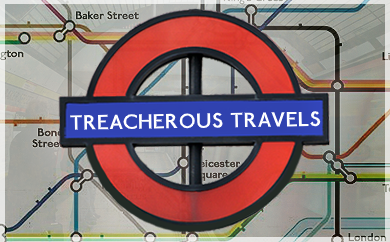 Harry, Ron, Hermione, and Griphook looked around at one another. This journey would be hard, they knew, but there was no other alternative. They huddled together, preparing themselves. Diagon Alley was a dangerous place to be these days, but they had no choice. Hufflepuff's Cup just had to be in the Lestrange vault. If it wasn't... They couldn't bear the thought. With a last look at Shell Cottage, they all clasped hands and vanished, appearing once more in an alleyway beside Diagon Alley.

T A S K
Your task is to tell the story of Harry, Ron, Hermione, and Griphook as they make their way to Gringotts Bank. Remember, the Polyjuice Potion is already in effect, so Hermione looks like Bellatrix Lestrange. We saw part of their journey, of course, but there must have been more to it! They must have some type of conflict, and they must reach the bank at the end, but other than that, the choice is yours.

R U L E S
- Post your story in THIS thread by 11:59 PM HEX time on January 31st.
- All entries must have a word count of between 150-400 words.
- Cheating will not be tolerated. All HEX terms apply.
- All entries that properly follow the prompt will be entered into this contest's drawing for prizes.
- All entries that show effort will receive one ticket for the USF Quarterly Raffle.
- Winners will be randomized.
- If you have any questions, don't hesitate to ask Jen.

"You might be poor, your shoes might be broken, but your mind is a palace." - Frank McCourt
3rd year Witch
Status: Offline
Age: 34
Posts: 562
Harry, Ron, and Hermione made their way down Diagon Alley to Gringotts. For awhile, they were all silent, terrified of the consequences if their plan should fail. Harry, while he understood the necessity of Griphook and himself hiding under the invisibility cloak, was beginning to wish he had a disguise as well. It was absolutely maddening to see Ron (that is to say, Dragomir), admiring himself in the dirty windows of the abandoned shops as they passed. Hermione was equally as infuriating. If she didn't keep forgetting to stay in character, they would all be caught before they even made it through the bank's front doors.
Harry heard the voice of Travers behind him. Luckily, Hermione was able to stay in character well enough to avoid suspicion, but it seemed that Travers was to remain with them for the rest of their journey to the wizarding bank.

"No room for mistakes now," Harry thought to himself as Griphook's fingers dug ever deeper into his flesh.

It was then that the worst happened. Harry hadn't noticed the bit of cobblestone that was sticking up out of the road. He stubbed his toe and began to sway. The weight of the goblin on his back was too much and he fell forward, exposing both of his feet as the cloak shifted.

He heard a terrible giggle from the dark side alley between Madame Malkin's and Flourish and Blotts. Looking over, Harry saw a haggard man running toward him pointing, opening his mouth to shout (possible hoping to gain favor with Travers from exposing Undesirable No. 1). Harry had to think fast. There was no time to warn the others. He jumped to his feet, snatching up the goblin and readjusting the invisibility cloak, and ran into the alley. Hoping to shut the man up, but not hurt him too badly, he raised his wand. Before the wizard in front of him knew what was happening, he saw a burst of light and thought he heard the word "Confundo" before slipping into a state of confusion.

Disaster averted, Harry caught up with the other, heart racing and out of breath. The three friends, Griphook , and Travers mounted the steps leading into Gringotts and saw two wizards guarding the doors, clutching Probity-Probes in their hands. The next trial was soon to begin.


Word Count: 388
(All info from the series taken from Harry Potter and the Deathly Hallows by J.K. Rowling)

“Don’t worry. You’re just as sane as I am.”
3rd year Witch
Status: Online
Age: 51
Posts: 45,036
The trio looked around Diagon Alley in dismay. Things had changed so much1 It looked like it’s evil counterpart, Knockturn, had spread its clutches out of its own narrow lane and swallowed all that was good. The Alley was dim and dank, with the faint odor of unwashed bodies and dead things all around them like a vicious miasma.

As they started their way through the mostly deserted street, Harry could feel Griphook shaking with suppressed laughter at the downfall of the wizarding world. It disgusted him that even when all four of them were in danger, the goblin could still show his resentment of humans. Ron looked pale under his disguise and Hermione had turned up her nose as the foul stench reached her. Of course this only helped her appear more like the haughty Bellatrix Lestrange she was impersonating.

Bad luck seemed to be following their very footsteps, or was it leading them to their doom? Even as they approached the Gringotts, it seemed to leap out at them. First they were accosted by a man screaming about his children. Then they were joined by a Death Eater named Travers. Various peddlers or this and that kept trying to make them buy this or that. They even saw that stinking heel of a wizard Mundungus slink into the shadows as they approached. But thank Merlin he couldn’t see who they really were. It would be just like him to sell them out!

Finally they were climbing the stairs to the great outer doors of the bank. Ron slipped on something wet and fell to his knees. On closer examination, he had trod in a pool of blood. Another ominous sign for sure. What else was going to go wrong?

4th year Wizard
Status: Offline
Age: 25
Posts: 15,312
Once upon a time this alley was bustling with life, but no longer. Posters plastered with the trios face lined the alley and it made Hermione slightly jumpy as they passed. She had to constantly remind herself that the face she was wearing wasn't her own, but that of Bellatrix Lestrange. Although she had practiced through the night, she wasn't entirely certain she could pull it off. Lestrange and herself were just so different. A quick glance to her left confirmed that Ron and Harry were also wearing faces that were not their own.

As they made their way down the cobblestone street, Hermione continued to rehearse what she was going to say. Griphook had made them practice dozens of times, slightly altering what he thought they should say with each iteration. Hermione was so wrapped up in her own thoughts that she almost didn't notice a pack of death eaters emerging from one of the shops. Ron yanked her elbow, pulling her away at the last second.

"Ah, Bells, you're coming to the gathering at Goyle's tonight yes?" the man questioned. Hermione swallowed the lump that hung in her throat.

"Yes," she squeaked, earning another nudge in the ribs from Ron. "Of course I am." The man spent a moment observing, obviously wary of the interaction. Confidence is key, Hermione repeated to herself, ignoring how Ron and Harry were holding their breath.

"What business do you have here today?"

Hermione took another deep breath before answering in the most affronted voice she could muster. "I have business at Gringotts. It's really none of your concern." There was a terse moment before the man nodded his approval and moved away. Harry, Ron, Griphook, and Hermione continued down the street until they finally made it through the doors into Gringotts. They were just one step closer to retrieving the cup and ending this journey. For Hermione, it couldn't come soon enough.

Proud Gryffindor here, so smile!!! It increases your face value =)))
5th year Witch
Status: Offline
Age: 59
Posts: 2,094
Harry, Ron, Hermione, and Griphook ducked into the nearest quiet alleyway they could find. Harry helped Hermione steady herself while Griphook complained.
"Why didn't you practice before you drank that Polyjuice Potion??"
"How was I to know that walking in heels was as difficult as this? Most women make it look so easy!"
"We're wasting time, hurry up!" Ron urged.
"Well if you can do any better I'd like to see you have a try at it!" Hermione snapped back.
"Ignore him, Hermione, you're doing fine", Harry whispered. "Do you think you can walk on your own now?"
"Oh just ignore me..."
"Hush, Ron! You aren't making things any easier!"
Griphook looked out of the alleyway. "You best be getting the hang of it soon or it's all our deaths."
"She's almost got it, right Hermione?" Harry questioned.
Hermione wobbled just a little. She looked at Ron and turned away disgustedly.
"I think I'm ok now Harry. Let's go."